Art from the edges

In the third edition of the Kochi-Muziris Biennale, the idea is to look inwards, to imagine and to interact with art across 12 venues in this industrial town by the sea in Kerala.

Anil Kasbe crosses the boundary between art and poetry, standing with his back arched in the Sea of Pain. Aylan Kurdi, the dead Kurdish toddler whose body washed up on the shores of Turkey, is no stranger to the 18-year-old Lavni dancer. In the third edition of the Kochi-Muziris Biennale, the idea is to look inwards, to imagine and to interact with art across 12 venues in this industrial town by the sea in Kerala.

Kasbe has stepped into a man-made sea, an installation by Chilean poet Raul Zurita in Aspinwall’s biggest warehouse, mimicking the journey of the Syrian refugees across the seas. Kasbe himself is a migrant, forced out of his village into a brutal source_and_date. The dancer interprets the poet’s work, but he is unable to read the simple poem on the wall. But Zurita, the first artist to be announced by the biennale team, has found his response. A young boy, who has been through a similar journey, and who understands what unbelonging means. He belongs neither to the source_and_date nor to his gender.

“Don’t you listen? Don’t you look? Don’t you hear me? Don’t you see me? Don’t you feel me?” writes the 66-year-old Zurita. The poem, he says, took him 30 seconds to write. But to think of it took a very, very long time. As long as 66 years, the Chilean poet says. Born in Santiago in 1950, Sea of Pain is his response to the crisis of migration. He read about it, as we all did, in newspapers. The sea is Kasbe’s journey, too. His performance of Lavni, a theatrical genre combining song and recited poetry, dance and drama and fusing social, political and personal commentary, is an attempt to elevate the popular dance to the status of an art form. Kasbe, who left Manpur village in Maharashtra when he was very young, first learnt the movements by watching Lavni dancers on TV. It was a struggle personally (“boys don’t dance”), but the ultimate aim was to chronicle his own story, he says. That’s the spirit of this biennale in its third edition- poetry, and ephemeral art. Artist and curator Sudarshan Shetty says the intention of the biennale, on for 108 days, featuring 97 artists from 31 countries, is to create multiple narratives. It is all about intersections, introspections and interactions. “And conversations,” he says.

The challenge was to transcend the personal, interact with the universe. There are no pretensions. And to answer that classic question, what is art, Shetty says it is the process that enables us to understand who we are. “We must go back to who we were, to be able to look forward,” he says.

Photographer Dayanita Singh says this is an existentialist biennale, one that requires the viewer to gaze and respond from a singular point of view. Is the heap of stones with the tag, ‘Please don’t touch artwork’, art? Is it just a projection of words? Is it the Sea of Pain where everything dissolves? 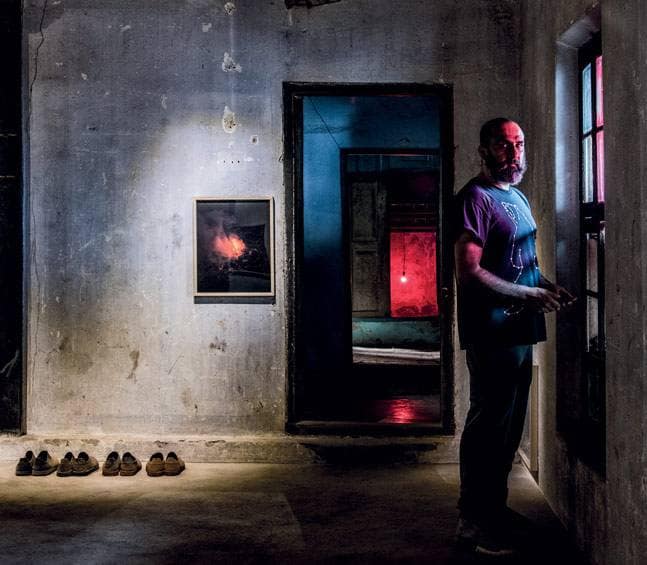 Bharat Sikka at his installation, where the flowers still grow, inspired by novelist Mirza Waheed’s the collaborator

In many ways, fashion photographer Bharat Sikka’s Where the Flowers Still Grow installation at the Kochi-Muziris Biennale is political. It all started in 2014 on a holiday in Kashmir with his family. Wife Ameet read out passages from Mirza Waheed’s book, The Collaborator, and he was intrigued. He sensed the melancholy of the landscape. As a photographer, he responded to the unease. Never for once did he feel the space was his. He photographed a man in a pheran on a winter night deep in the forests as he looked into the camera and as he faced away from it. In that instant, Sikka understood that the landscape belonged to the man. In looking away, he had reclaimed it from the lens of the photographer. The blurred, diffused photo hanging in a black room with Sikka’s words occupying the other wall is a challenge to all singular narratives.

“By the way, did I mention there’s a profusion of tiny yellow flowers growing among the grasses here? You can see bright yellow outlines of human forms enclosing darkness inside. It makes me cry…I don’t know the name of the flowers. Some kind of wild daisies, perhaps,” Mirza Waheed writes in the book. That’s where Sikka’s story lies. In between. Then there is the stone photograph that speaks without words. “Shabir bhai said if he finds the stone, it will change things. Everything will vanish. It was poetic. I found a stone. It represented the magical reality of the place,” he says.

An album of 90 photographs (part of the Alkazi Collection of Photography) that was used as evidence in the Bhawal Court case was the starting point for the project Rehearsing the Witness. Chaudhari uses the testimony of the plaintiff, Kumar Ramendra Narayan Roy, as an audition and in doing so considers the relationship between law and performance. Both the domains of the law and theatre/acting frame larger questions that pertain to the production of truth and reality, assumptions of stable, consistent and believable identities and the construction of a credible narrative. 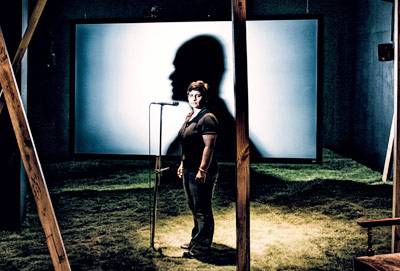 There are many versions of how the Kumar of Bhawal, a zamindari estate in Dhaka, died. In December 1920 or January 1921, a sanyasi appeared near Dhaka and was recognised as the Kumar. His claim was contested by the British Court of Wards, and Bibhawati Devi (the widow of the younger deceased Kumar of Bhawal, Ramendra Narayan Roy). The case was in trial between 1930 and 1946, resulting in a victory for the plaintiff, who died shortly after. Chaudhari tries to explore questions of identity and acting. She says she read through more than 26 volumes of testimonies and travelled to Britain to collect material.

The performance is based on the technique of audition, which Chaudhari says is a time in theatre where you are staging yourself and also the other. There are always open questions. There are questions on memory and identity, and she says these are critical ones that she seeks to explore. The text is about the journey across a landscape. “Truth is a shifty space,” she says.

As a child, graphic artist Orijit Sen often accompanied his father, a map-maker with the Survey of India, to remote border areas. He watched rivers and mountains become dotted lines and patterns in a map. “I was aware of the physicality of the landscape, and then in his practice they became abstract patterns. I began to see those landscapes. I don’t see maps as routes. I see the lake and the trees. Maps become storytelling devices of narrating landscapes. It is my language,” says Orijit Sen. At his installation of murals of three places – Hyderabad, Punjab and Mapusa market in Goa – he invites the audience in, lets them fix pieces of a jigsaw puzzle and when they have done it, the Blue Charminar lights up. It is a game-based installation that invites everyone to construct and deconstruct images of cities to explore the various possible layers of meanings. The interactive installation is an archive of memory and folklore.

The game-based installation is spread across four interconnected rooms, where the murals capture everyday lives, histories and economic activity but the images are looking far deeper into these aspects of life in urban spaces. Like in a Punjab mural, Heer-Ranjha appear in several forms as they are reflected across forms like a painting on a truck, a song. If they had to exist in today’s era, it would be a meme, he says.

Abhishek Hazra moves around using the mobile lecture as his medium, a guided tour that consists of alternative readings of works from the biennale. The performance and video artist says he is fascinated with the “unreasonable effectiveness of mathematics” and through this performance he wants to talk about hidden truths and responses that the artist himself has not anticipated. “What are the kind of ironies produced when a ‘spontaneous’ cultural response to something becomes a thing in itself? Which is what photographs documenting decaying mid-century industrial structures have become, particularly within the context of the First World economies and the overall collapse of the manufacturing industries,” he says. His form is speculative fiction. He says he is interested in the questions of the relationship between tradition and modernity. He quotes Einstein-“The most incomprehensible thing about the world is that it is comprehensible”-saying it precisely sums up his approach.

To call it an existentialist biennale would be undermining the range of artistic practices that have been curated by Shetty, who has given it 18 months of his life. In a way, it is a return to pure forms, to words and their ability to transform themselves into a sea, a pyramid or a projection. This is not art for art’s sake. This is political and emotional. As Zurita says, poetry can’t save the world but the world would end in 30 seconds without it. With all its chaos, the biennale comes as a beacon of hope across dark seas. And to cross it, one must get one’s feet wet. A poem is waiting to be read at the other end.