2019 ASIAN ART BIENNIAL: “THE STRANGERS FROM BEYOND THE MOUNTAIN AND THE SEA” 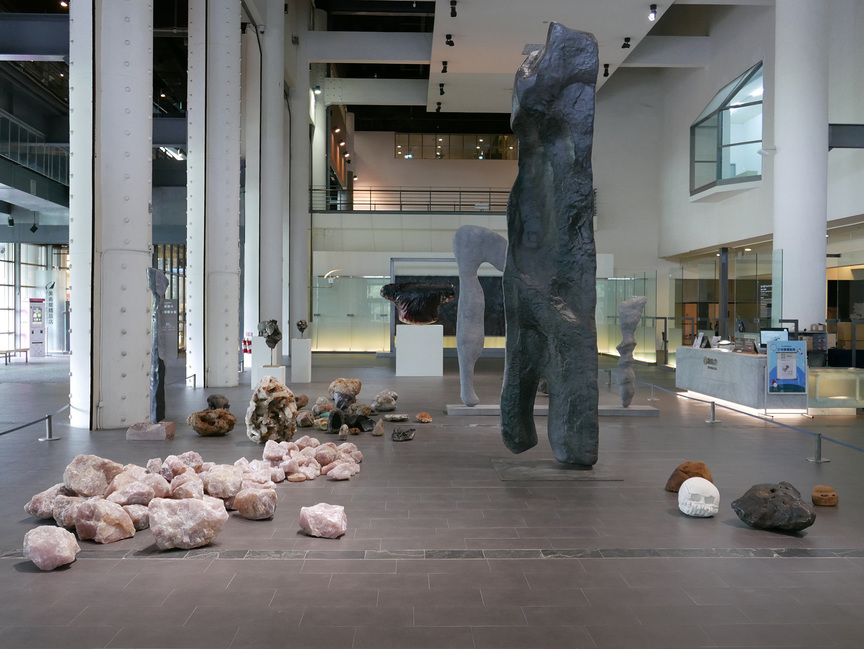 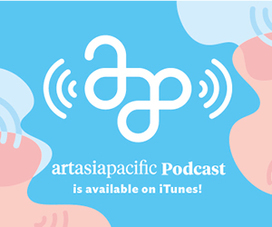 Rocks and minerals were everywhere at 2019 Asian Art Biennial, titled “The Strangers from Beyond the Mountain and the Sea,” beginning in the lobby of the National Taiwan Museum of Fine Arts (NTMoFA), with Wang Sishun’s Apocacylpse series (2015–19), a collection of stones from around the world with anthropomorphic features that evoke the long history of humans living in close contact with the earth. In an atrium outside the galleries, Chiu Chen-Hung’s sculpture Shattered Romance (2019), a deconstructed, colonial-era carrack furnished with blue sails with cloth made from nephrite and meteorite minerals, hung next to Kan Chao-Yang’s white marble sculpture, Wind from the Sea (2006). 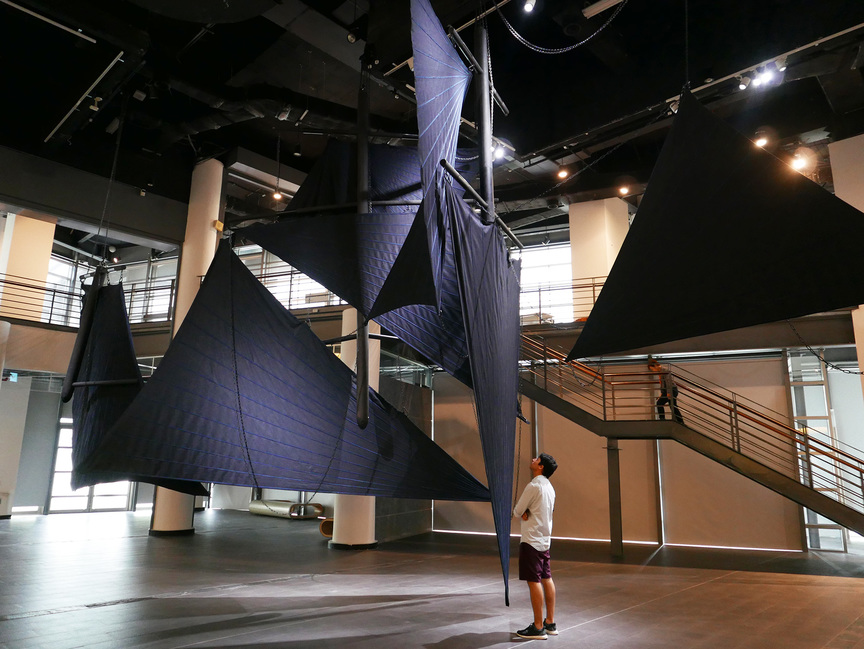 “Minerals – Clouds” and “Zomia – Sulu Sea”—are points plotted on opposite sides of the exhibition’s schematic diagram by co-curators of the 2019 Biennial, Ho Tzu-Nyen and Hsu Chia-Wei, both also artists working primarily in moving images. The title refers, respectively, to the Zomia highlands of southeastern Asia, and the Sulu Sea north of Borneo and south of the Philippines—two regions that have, over the centuries, been proven as not only ungovernable and lawless, but also the sites of cultural exchange. The “stranger” part of the title educes the ancient Japanese marebito, supernatural beings that if welcomed with festive rituals would bestow wisdom. For Ho and Hsu, this also confers the meaning of the “others”—whether immigrants, minorities, foreign merchants, or shamans, spies, partisans—through whom we become aware of ourselves and our society.

On the curators’ schematic drawing—which is reminiscent of art historian Rosalind Krauss’s Sculpture in the Expanded Field (1979)—between the anarchic highlands and unruly seas, and between the extraction of rare minerals for smart devices and our virtual doppelgangers populating the digital cloud, Ho and Hsu plotted a central point they designate the void. This concept is a hallmark of Asian thought-systems whose “malleable nature,” they propose, “has made them vulnerable to political (mis)appropriation.” But Ho and Hsu also see this emptiness as a space of emergent possibility to overcome the political and ecological crises of our time, asking: “How can the unfinished project of Asian decolonization be rethought through these entanglements?” and “How can we think creatively of the Void, and in the Void?” 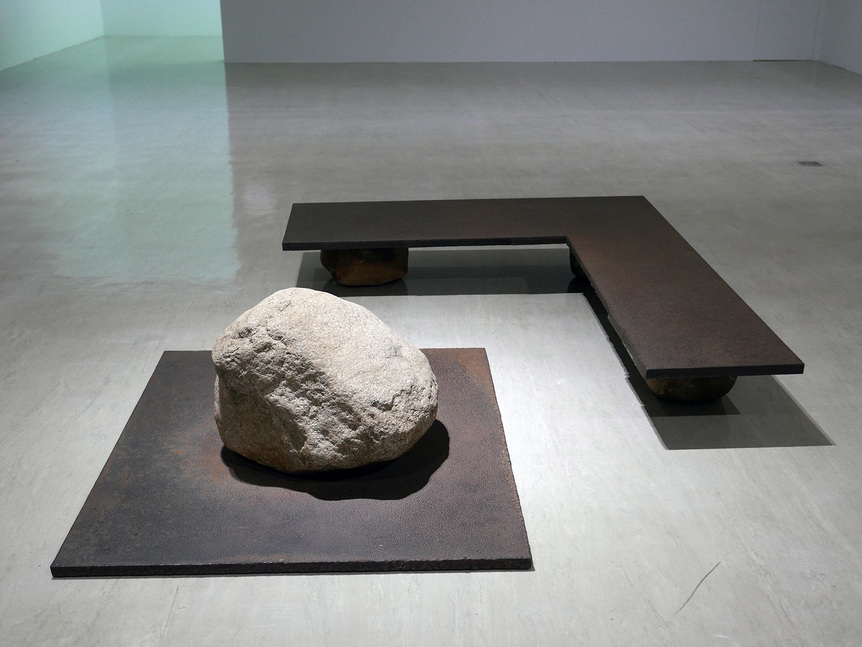 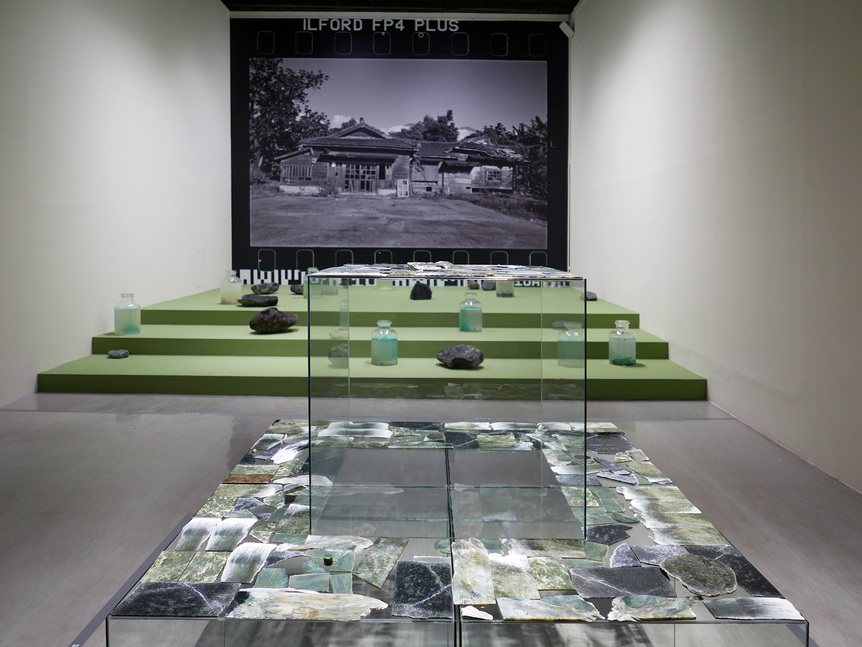 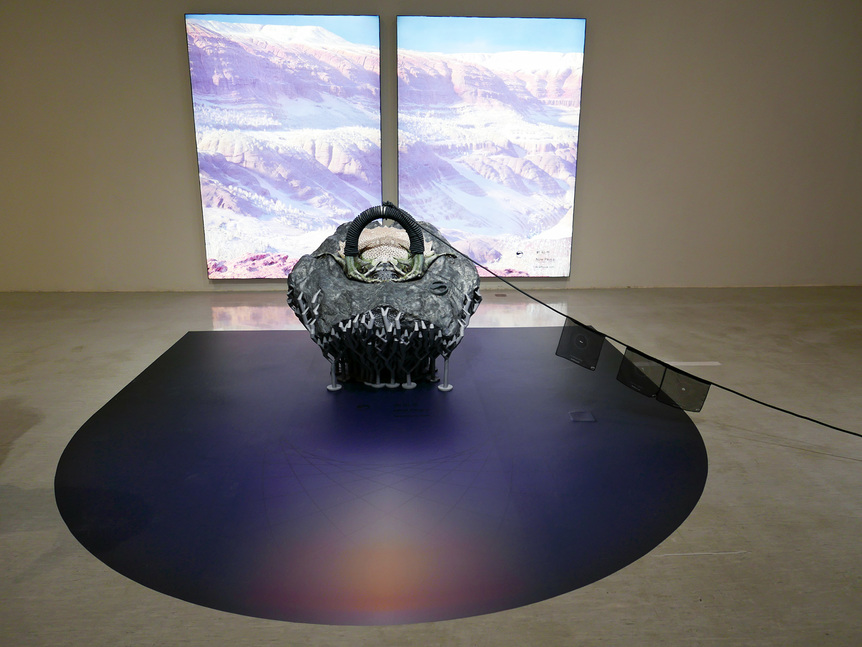 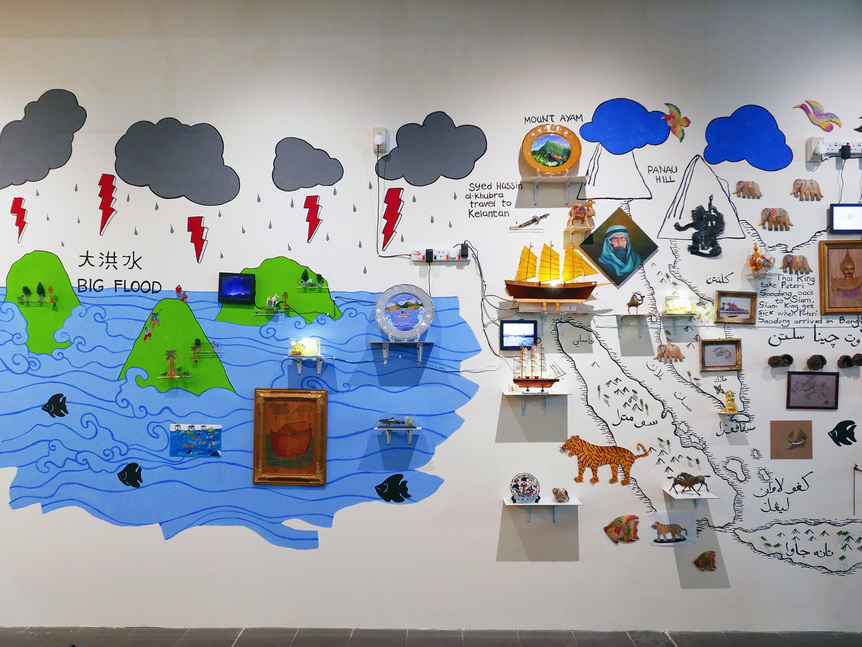 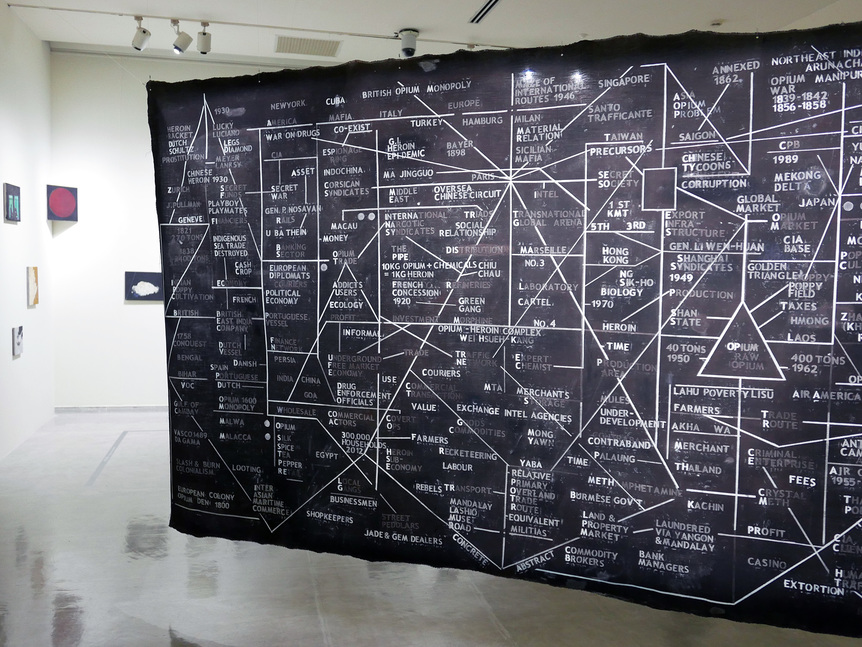 Among the 30 artists and groups, rocks in artworks took on political and ecological overtones. Three out of four chapters of the exhibition showed variations of Lee Ufan’s Relatum sculptures (2007/19), consisting of koanic compositions of rocks paired with rolled steel forms or plate glass, emphasizing the contrast between nature and the human-made. Shilpa Gupta’s machine for a pair of clapping stones, Sound of the Ground (2017), utilizes two rocks from the Teesta river area at Indian-Bangladeshi borders, where smuggling and illegal cross-border trade defies the Indian government’s endeavor to confine Bangladesh. Chiang Kai-Chun examined the 1960s discovery of jade (nephrite) and the subsequent mini jade-rush in the area of Shoufong Township, in his Fengtian Jade Garden (2019), for which he also attempted to produce synthetic jade in large vats. Meanwhile, Timur Si-Qin’s multi-media installation, East, South, West, North (2018), extends his New Peace (2018-) project with lightbox prints, 3D-printed sculptures that resemble rocks grown over with tree roots, and a virtual reality journey over a pristine landscape, all using the vernacular of commercial branding to extend his interest in reviving a new spiritual orientation and care for nature.

The shores where earth meets water were explored through several unlikely geographies. Roslisham Ismail’s installation, ChronoLOGICal (2018) was a wall of souvenir-like objects and texts that narrates the history of the spread of Islam in southeast Asia since the 9th century, through maritime trade routes from Yemen. Charles Lim’s SEASTATE SIX (2015) is a video about the massive undersea caverns carved out around Singapore to store hydrocarbons. Liu Chuang’s three-channel video, Bitcoin Mining and Field Recordings of Ethnic Minorities (2018), while mapping the exploitation of hydroelectric power in remote regions of southeastern China and the prevalence of Bitcoin mines that source cheap energy, also portrays the digital colonization of the region’s indigenous groups. The anarchist thread of Liu’s project led into Sawangwongse Yawnghwe’s painting series concerning the international narcotics trade in the Golden Triangle region, with a large, black diagrammatic canvas, The Opium Parallax (2019), which hung from the center of the room. Smaller canvases, what Yawnghwe calls Footnotes, depicting scenes from his family’s history in the Shan State in addition to episodes from the Asian narcotics trade clustered on the walls. In the adjoining gallery was a related project by the duo jiandyin (Jiradej Meemalai and Pornpilai Meemalai), comprising a jadeite sphere water fountain that circulates urine gathered from people working in northern Thailand, laced with methamphetamine. 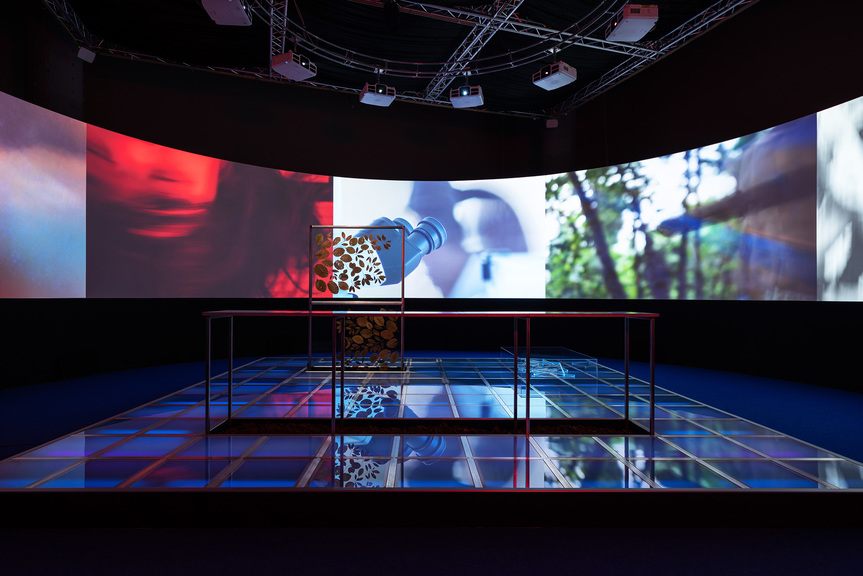 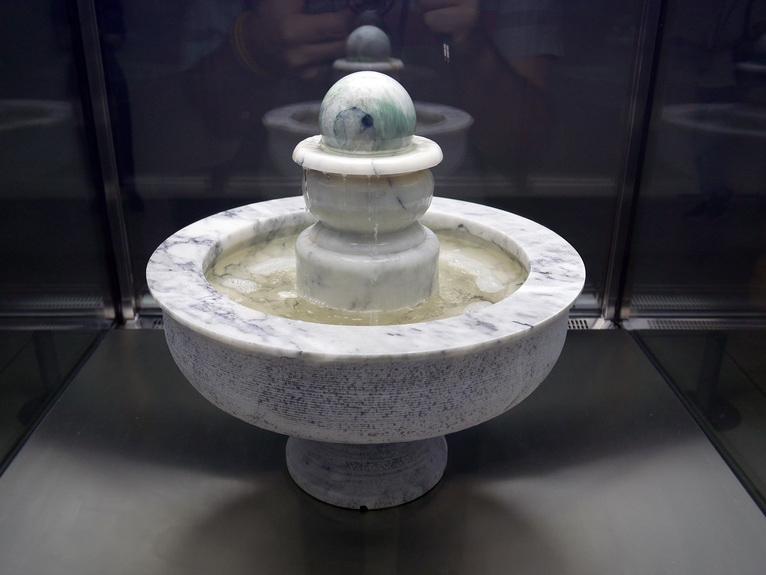 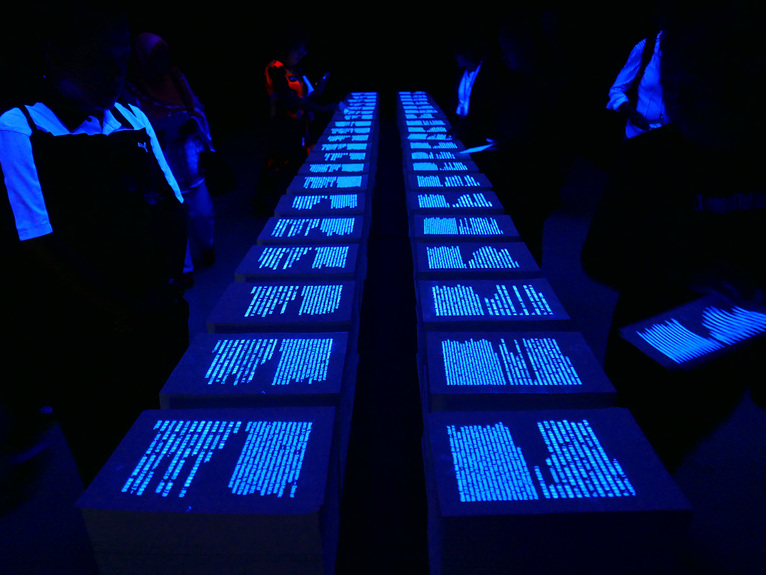 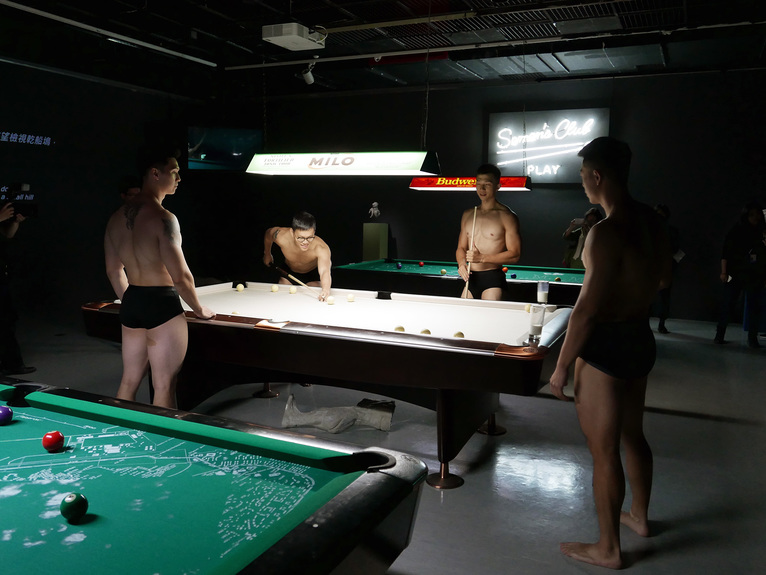 Japan’s 20th century history, and how it impacted the region, particularly through colonization, was a recurring interest throughout. Ting Chaong-Wen’s multi-channel video and bar-like, black-light installation Virgin Land (2019) looked at the efforts to grow cinchona trees in Taiwan, to produce the anti-malarial drug quinine. Park Chan-Kyong’s two-channel photo-slide installation, Kyoto School (2017), pairs romantic photographs of the Kegon waterfalls with quotes from The Standpoint of World History and Japan (1941)—discussion by scholars of the Kyoto School—alongside excepts from the diaries of kamikaze pilots who justified their imminent deaths using the language of French and German poets and philosophers. Ho Rui An’s video essay Student Bodies (2019) tracks the history of Japan’s radical students’ movements of the 1960s to the Asian high-tech industries and Singapore’s prison-like architecture for universities, the latter ironically designed to prevent protests. Antariksa’s installation Co-Prosperity #4 (2019), similar to the one shown at the 14th Sharjah Biennial earlier this year, comprised a black-light-lit room with a table stacked with sheets of paper printed with biographies of Japanese intellectuals who worked for the military’s propaganda department during the 1930s and ’40s. Looking at the repressed revanchism of the postwar era, Yuichiro Tamura’s Milky Bay installation (2016) was an ersatz billiards hall that, through a mixture of signage, a narrated slideshow, modified pool tables, videos, and cast-concrete fragments of classical Greek sculptures, evoke author Yukio Mishima’s homoerotic fascinations with both American soldiers in Yokohama and Greek men, which fed into Mishima’s obsession with body building and culminated in his failed attempt to rouse Japanese self-defense forces into a military coup d’etat. 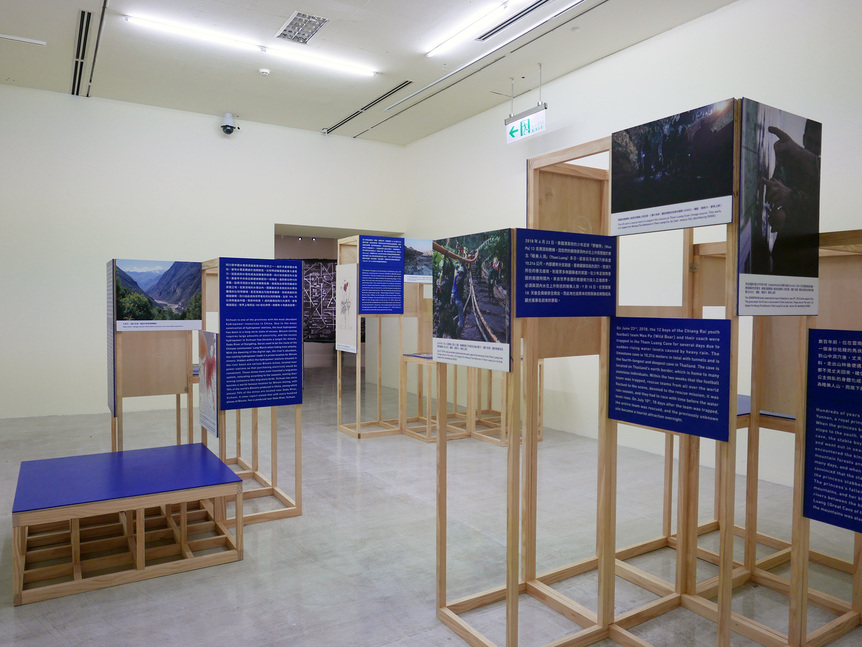 Installation view of one of the exhibition’s “Footnotes.” 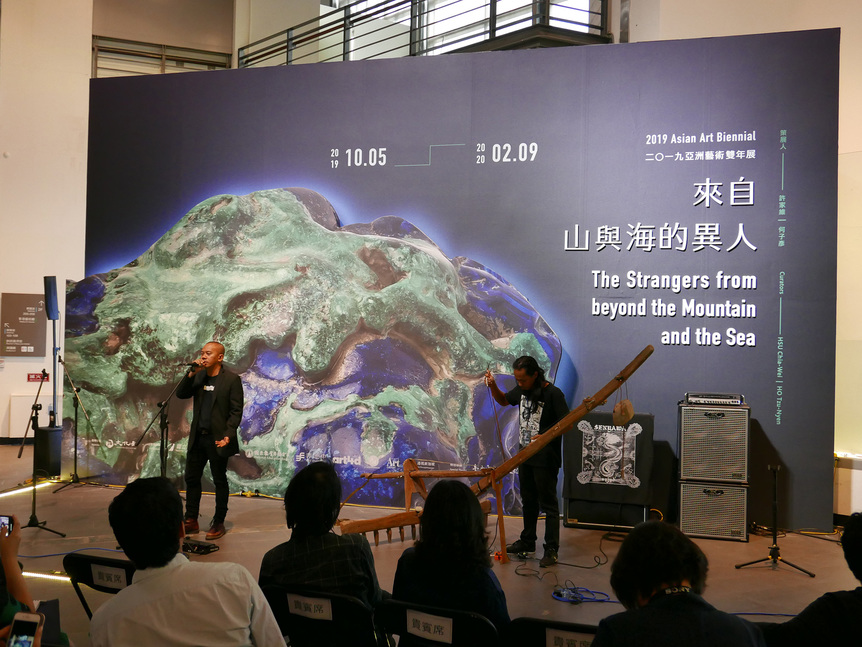 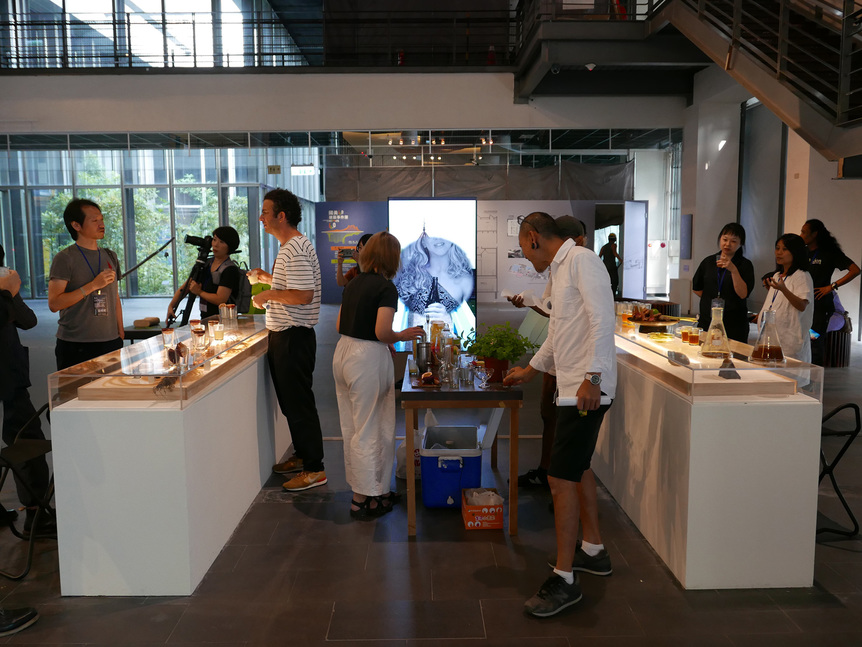 Given the wide range of topics explored in the show, co-curators Ho and Hsu interspersed rooms with “Footnotes” in each of the exhibition’s four sections, where contextual information, researched by Lin Yi-Hsu, was printed on posters while supplemental graphics or video materials were also shown. This felt particularly beneficial for works requiring an understanding of complex backgrounds, as was the case with Zuleikha Chaudhari’s video and radio-studio-like installation Rehearsing Azaad Hind Radio (2018), which features the story of Subhas Chandra Bose (1897–1945)—an Indian nationalist who tried to end the British occupation of the subcontinent by soliciting the help of Nazi Germany and Imperial Japan, during World War II.

Having artists as curators has the added benefit of loosening formalities, both in terms of the theoretical contortions that curators often put themselves into with mega-exhibitions, as well as with the proceedings themselves. The press conference was a perfect example, with the Indonesian duo Senyawa performing a kind of Javanese neo-tribal drone metal—with Wukir Suryadi playing his custom-built instrument Garu (2012), made from an old wooden agricultural tool, alongside Rully Shabara Herman who sang in soaring vocals. Meanwhile, the Taiwanese group Open Contemporary Art Center and the Indonesian collective Life Patch collaborated on Deposits of the Island (2019), which filled the atrium with various interactive projects including games, a massage table, in addition to workshops on medicinal herbs and spices. Although such informal practices may not be the best fit for an institutional space like the NTMoFA, they do represent an important element of regional art that is as much about live collaborators and conversations as it is about the art objects themselves.